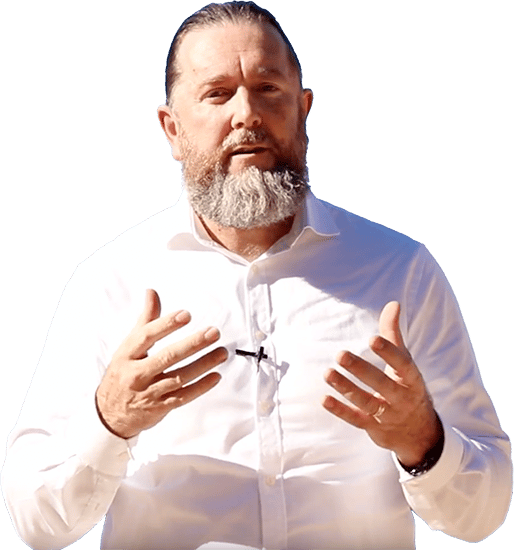 How the Right Brain Retraining Method is the Key to Ending Any Addiction, Without Relapse or Struggle (15 Minutes Per Day)

What You Will Learn On This Free Training

How the right Brain Retraining strategy is the key to ending any addiction without relapse or struggle.

How my clients are using this exact same strategy on a variety of addictions, quitting everything from nail biting to alcohol, nicotine, gambling and hard drugs.

The correct way to implement this strategy, which actually requires just 15 minutes per day.

The Breakthrough Method to Rewire Your Smoker's Brain

Willpower Is Not Needed

Quitting Is A Skill

The reason why all the other methods you’ve tried have failed you, is because they don’t understand what mental & physical cravings actually are. These faulty methods don’t eliminate mental cravings, which continue for many, many  years. So you’re forced to use willpower for years, so you don’t relapse. Then a strong emotional event occurs & you end up relapsing again! The truth is… your brain has adapted to continually generate cravings, and it needs to be retrained back to normal… so you don’t get cravings anymore. Then you won’t relapse.

Learn at your own pace in a community with others who are going through the same journey. All the support you need is included in your membership. 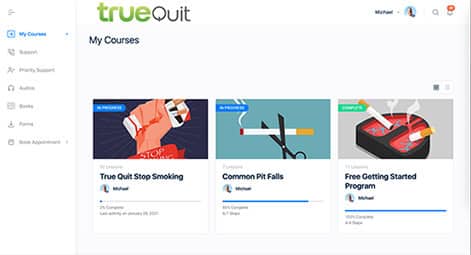 You’re not alone. This is a member’s only private community who are going through the same journey together. 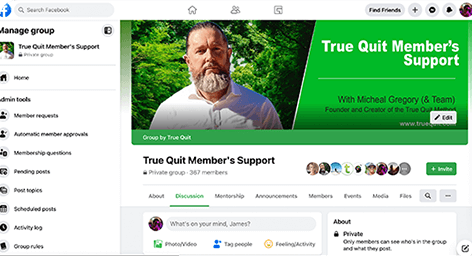 Everything in your member’s account is beautifully presented and available on any device. 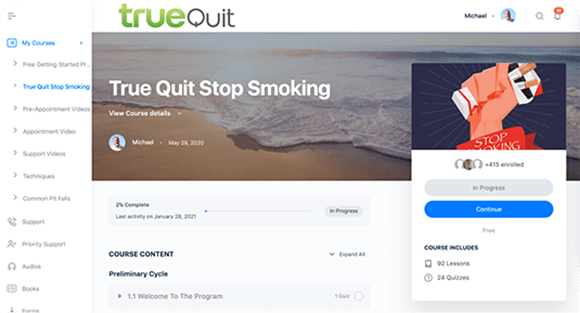 Each week you can ask any questions and make sure you’re on track.  This is recorded and posted in the private Facebook group so you can watch it anytime. 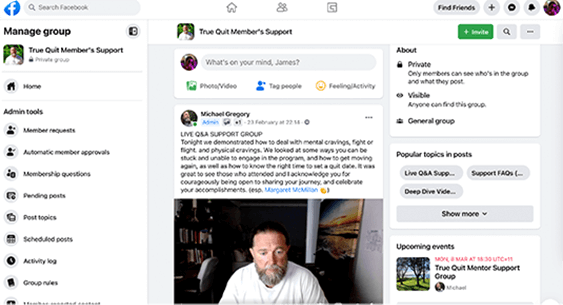 The course is designed so that you can watch a quick video each day. You will gradually absorb a completely new way to stop smoking. 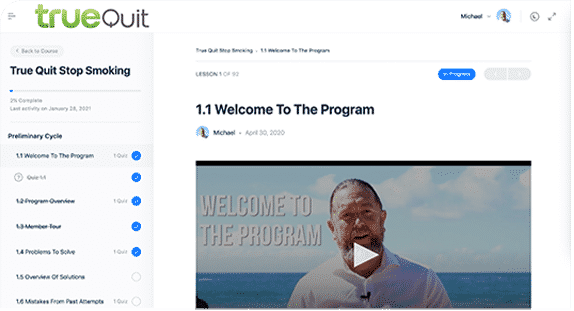 After completing their stop smoking journey, some members are so happy that they volunteer to support others. If you would like this support you can browse the available mentors and make contact. 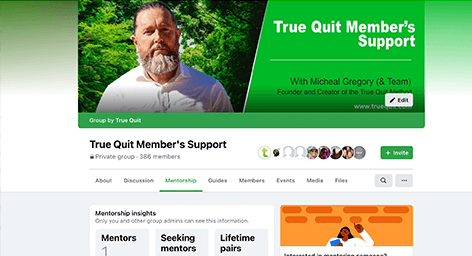 It’s 12 month today
I had my last cigarette
I have not once felt like I need to have a smoke from that day
I walk out True Quit
It’s the easiest way to give up smoking and the cheapest because it works.
Stop wasting money on the patches tablets etc.
Do True Quit and you will not regret it.
It’s so easy
Thanks True Quit

I have quit smoking for 3 months now thanks to True Quit!! I haven't lapsed, experienced only very minor withdrawal symptoms and feel great. I was a very heavy smoker and skeptical about trying this method of quitting smoking but thank god I did. I truly recommend giving true quit a go!!!

30 days a non smoker and True Quit has almost paid for it's self. I'm saving about $240 a fortnight by not smoking. BTW going cruising on the carnival legend next Tuesday for 11 days . Thanks Michael and the True Quit gang your amazing I have been spooking your name to everyone I know who is over smoking like I was, you may have some takers in the future.??

Hi I have been a smoker for over 40 years. I watched the current affairs segment on Doug Walters and thought ill enquirer about this program. I did and thought I'd give it a go. I really didn't think it would work as I have tried heaps of different things over the years. Well it's been 5 weeks since I've had a smoke and I truelly Carnt believe how incredibly easy it was. I'm still in shock. I have no "will power" and believed you needed that to give up. To my surprise you don't!! I didn't expect that this program would work but everything I was told was true. Thank you true quit finally a true way of being able to stop smoking

l did this 2 weeks ago and have never felt better. As a heavy smoker for nearly 40 years l didn't think l could stop,but so far so good 🙂

Big Shout Out to Michael and all at TrueQuit !!
You are amazing - can not Thank You enough for putting this program together and for sticking with it !!!
12 weeks today since my treatment in Brisbane I have not had even 1 puff of a cigarette since ??
After smoking for 42 years 25 per day ! I had tried everything on the market and was resigned to probably smoking forever until I took the plunge and gave TrueQuit a go Nothing to loose and IT WORKS !! True !!
I gain nothing by promoting TrueQuit But if I can help just one other person I have Paid it Forward !
Thank you TrueQuit !

I am delighted to share my happiness because I can now say I'm a non smoker. I was dubious about the program until I saw Doug Walters talking about his experience (see on youtube). I am 58 and have smoking since I was 16. I had become a chain smoker and my smokes were my 'best friends"... The thought of being without them made me anxious and lack confidence that it was possible. But given how much they were costing my pocket and my health, my best friends were becoming my greatest enemy. But let me tell you, without sounding like a paid commercial that True Quit is unlike any other program and I fully endorse it. It works and I'm rapt.

Can't believe how well this treatment works. I've never gone more than 24 hours without a cigarette in my previous attempts to quit over the last 16 years. I smoked a pack a day or more if I had a drink. I had the treatment on Sunday and haven't felt like a cigarette until today. I was going to buy a packet but instead called my support person who helped me through the craving and now I don't feel like a cigarette anymore. This really works if you follow the instructions and use their support as needed. Thank you True Quit!

Thanks to True Quit I have been smoke free for 8 days! My husband is very impressed that I didn't get moody and yell at him as I have with every other attempt at quitting. I have 4 kids and it is school holidays and it was still easy not to smoke. I would definitely recommend it to anyone wanting to stop smoking!

I have finally quit for good. Watching the videos again and again gave me the reassurance that I was on the right track and doing the right thing. The support was always instant and extremely understandable at times when I felt anxious. Feeling on top of the world thanks to TRUE QUIT 🙂

its been a little over 4 months since I did the treatment, A big thank you....no cravings nor do I even think of them now and it was easy and I didnt expect it to be so easy i thought there would be challenges but no and after smoking for 35 years I didnt expect this to work, it has and I will never pick up a fiflty cigarette again. If you are thinking of doing the programme do it, if I can anyone can.